Oliver Sacks, the extraordinary neurologist who became famous through his detailed narrative writing about odd case histories for a lay audience, published an autobiography On the Move shortly before he died in August 2015. His best known book was Awakenings that was made into a movie with Robin Williams and Robert de Niro. 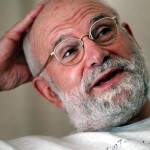 I knew him when we lived in neighboring rooms at Oxford. He left his home in London to live in America.

I have been invited to join a panel of physicians for a discussion on Dr. Sacks’ life and work.