Richard Hoskin has written for pleasure and profit ever since he grew up in a family of
journalists in Cornwall, the Celtic tip of Britain. Cornwall is the legendary home of
ghoulies and ghosties, and long, leggity beasties, of pirates and smugglers and of
King Arthur and his Knights of the Round Table.

After five years of research, writing and rewriting he has recently published The Miner
& the Viscount, an historical novel set in Cornwall in the eighteenth century. It was a
turbulent period when the Royal Duchy of Cornwall had 44 Members of Parliament, hundreds of deep
tin and copper mines, and was a microcosm of the industrial and agricultural revolutions,
the disruption of Methodism, and the Sunday school movement. 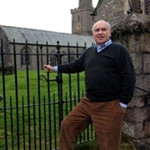