This Saturday, March 5th, I’ve been invited to a St. Piran’s Day party. It’ll be a rollicking good time! Unfortunately it is in Australia, which is a bit far. 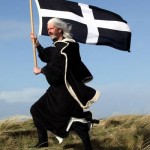 Piran is the patron saint of tinners and of Cornwall.  I tell his legend in the Prologue to The Miner & the Viscount. You can read it here.

The story speaks to Cornwall’s mystical origins rooted in the Celtic culture and language. Piran, or Pyran (Cornish: Peran) was an early 6th-century Irish Christian missionary who became a Cornish abbot and saint. It was Piran’s demise and miraculous escape from martyrdom that gives him legendary status.

Druid priests in Ireland tied Piran spread-eagled to a mill-stone and rolled it over the edge of a high cliff into the stormy Irish sea. Miraculously, the storm immediately calmed and Piran floated safely over the water to land upon a sandy beach on the Cornish coast. It became known as Perranporth. 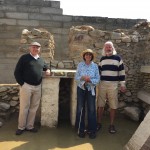 My daughter Sarah and I visited St. Piran’s Oratory when we were in Cornwall on our book tour last summer. We expertly guided by Eileen Carter, who led the restoration effort, and by Colin Retallick, who plays the role of the saint in the annual reenactment of his arrival in Cornwall.