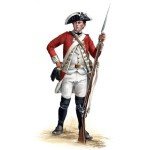 This is the story behind the story of Chapter 6o, “Order”. There is trouble at the mine. There is an accident. People are killed. The miners are angry and riot. Captain Addis Penwarden has lost control. The viscount takes matters into his own hands and calls in the militia with disastrous results. The young officer does his best to calm the situation.

“I have my orders sir,” said the officer. “Restore order whatever it takes. There’s destruction here, arson, civil disobedience; this is a riot. I came fully prepared.” He handed the bridle of his horse to the drummer boy who walked it to the rear of the platoon. He turned towards his men. “Serjeant, you know what to do.”

The crowd quieted, watched in awe as they carried out the order with speed and dexterity. Each man took a paper cartridge from the pouch at his belt, bit off the end, sprinkled a little powder into the pan of his musket, pushed the steel back to cover the pan, poured the rest of the powder down the barrel, then inserted the paper cartridge and a ball into the muzzle. Then each man removed his ramrod from its position under the barrel, rammed the charge and ball down the barrel, returned the ramrod to its stowage position, and finally pulled the cock back to the “full cock” position.

The soldiers were ready for another order. The serjeant shouted again. “Front rank, kneel!”

The ensign signaled the boy, who beat a tattoo on his side drum, silencing the crowd. The young officer addressed Eliot. “Sir, I advise you and your companions to stand aside in case there is trouble.” Then he took a document from the pocket of his tunic, unfolded it, and said in a loud clear voice: “Under the authority duly given to me by the Lord Lieutenant of Cornwall I hereby give notice as follows.” He read, “Our Sovereign Lord the King chargeth and commandeth all persons, being assembled, immediately to disperse themselves and peaceably to depart to their habitations, or to their lawful business, upon the pains contained in the act made in the first year of King George, for preventing tumults and riotous assemblies. God Save the King!”

He looked round the faces in front of him to see what effect he was having. Some appeared cowed. Others, like Tom Kegwyn, were defiant.

The officer continued to speak. “The Riot Act makes it a felony punishable by death without benefit of clergy for any persons unlawfully, riotously and tumultuously assembled together to cause, or begin to cause, serious damage to places of religious worship, houses, barns, and stables.” He looked up and added in his own words, “That undoubtedly includes buildings such as this mine or places of manufactory.”

Some of the crowd moved back, including all the men who had worked on repairing the damage of the past days. Reverend Perry and his group urged those around them to move back and leave.

Tom Kegwyn didn’t move, but stood his ground, his chin lifted. He picked up pieces of wood, threw one on the fire, and kept another as a cudgel. “I’d rather swing than starve!” he yelled. “Come on, arm yourselves, there’s more of we than they.” He started towards the soldiers.

Lizzie tugged at his arm to stop him charging. Tom broke into a run. He ignored an order to halt. The young ensign nodded to the serjeant.

“Platoon, present, fire!” A volley of shots cracked out and echoed from the walls of the engine house. The crowd groaned. Three bodies slumped to the ground. Two were tinners who had been at the side of Tom Kegwyn. One was the woman who had been trying to save him from himself.

To my mind it is vital to ensure that descriptions like this are authentic. I was proud of my first draft. I sent it to the regimental museum of the Duke of Cornwall’s Light Infantry in Bodmin, Cornwall, and asked the historian his opinion. His comments yielded many corrections. Here is part of what Major Hugo White wrote.

“The ‘slope arms’ was not used till the late 19 th century. The musket was normally carried when marching to attention in a position known as the ‘shoulder’. Troops marched in file (twos) or columns of fours until about 1935. Sergeant was always spelt ‘serjeant’ at this time (and still is in many regiments).  Sashes are silk or woollen material.  These were of heavy buff leather known simply as belts. The term should be coat.  Tunics were first introduced in 1855. Trousers were not part of male attire till much later.  They would have worn white breeches with long black gaiters reaching above the knee. Soldiers wore tricorn cocked hats.  Shakos were not introduced till 1806. An officer is never addressed as Ensign or Lieutenant.  If Eliot knew the officer’s name, and he would doubtless have asked, he would have addressed him as ‘Mr Maitland’. Kettle drums were carried by cavalry mounted bandsmen, slung in pairs either side of a horse’s withers. The drummer would have had a Side Drum.”

All this led to correcting multiple details, not least the type of drum used in an infantry regiment to signal orders and the terms that describe them such as “tattoo”. I was so relieved to have found such a knowledgeable source. On top of all this came Major White’s description of the 18th century drill for loading and firing a musket.

“On the command load, the soldiers would have taken a cartridge, bitten off the end, sprinkled a small quantity of powder into the pan, pushed the ‘steel’ back to cover the ‘pan’, poured the rest of the powder down the barrel, followed by the ball and the paper cartridge (to act as a wad), remove the ‘ram rod’ from its position under the barrel, ram the charge and ball down the barrel, return the ramrod to its stowage position, and, finally, pull back the cock to the ‘full cock’ position. The order would be ‘Present, fire!’ A well trained soldier could accomplish this highly complicated evolution in 15 seconds.”

And I often wondered about the origin of the idiom “reading the riot act”. It was fascinating to find out the form of words that was actually used under the law at the time.

It was rewriting this chapter that made me realize that my lofty goal of dashing off an historical novel in a year or two was totally unrealistic. But it was, of course, all so very worth while. Rewriting and rewriting made the book better.

I visited the museum during my 2012 visit to Cornwall and met Major White in person, a delightful and enthusiastic man. It was absorbing to learn more of the history of the D.C.L.I. It was my father’s regiment. He volunteered in World War I and served in India, Mesopotamia (today’s Iraq), Palestine and Egypt. I cherish his stories and souvenirs.

I am enchanted with all the connections I have enjoyed as a result of writing my book.

One thought on “Thursday Thought: Fire!”