This Story Behind the Story is the story behind Willy Bunt, whom many readers tell me is their favorite character in The Miner & the Viscount. Willy is a lovable rascal; uneducated but endowed with native intelligence and potential to improve himself, imaginative and ingenious, an eye for the ladies but a weakness for alcohol.

In Chapter 68, “Gwennap”, the great John Wesley is preaching on the evils of alcohol when there is a disturbance in the huge crowd gathered to hear him in the natural amphitheater.

“My brothers, you come here possessed of the demon drink, you are ready for the devil to do his work. You have given yourselves over to temptation. You have stripped yourselves of all goodness and virtue, and filled your heart with all that is evil, mundane, sensual and demonic. You have forced God’s Spirit to depart from you, because you are not disposed to tolerate a reprimand, and you have given yourselves like blind persons into the hands of the devil, permitting him to guide you according to his will.” 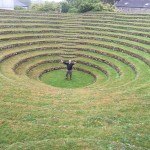 The preacher attempted to bring his sermon to a conclusion, speaking with emphasis and deliberation as he moved into his peroration. But he was again interrupted by a disturbance down in the pit on the far side, to the renewed consternation of the crowd. A disheveled man among the tinners was angrily shouting and swearing, remonstrating against the words of the sermon, protesting against Wesley’s call for decent living, forswearing profanity and drunkenness. “You’m a bloody prig, preacher,” he yelled. “Ye dunno whereof you speak, us can’t ’elp takin’ a drop from toime to toime, us needs cheerin’ up in this miserable life.”

The man staggered as his neighbors roughly held him up by the arms to restrain him and stop him from falling. He wrenched himself free and swung his bunched fist at his would-be captor, punching him squarely on the jaw, knocking him to the ground. Women screamed. Stewards who had accompanied the preacher came down to help restore order. The Eliot women recognized him first. Morwenna Clymo put her hand to her mouth. Catherine Eliot reached for her husband’s arm. “My God, it’s Bunt,” she gasped. “So this is where he got to. Somebody get him away from those men.”

A man standing nearby called out indignantly, “Call the constable, he’s drunk!”

Drunkenness was a major social problem in the 18th century, especially among the poor. Alcohol was cheap and readily available. John Wesley strongly believed in what he called social holiness, and preached against social evils. The Methodist church like the other non-conformist, or dissenting, sects led the temperance movement and made total abstinence a central pillar of their faiths, indeed right up to the present day. Our much admired Member of Parliament Isaac Foot was a Methodist local preacher and a staunch temperance leader.

Why did I write about this topic? When I was a boy growing up in Liskeard my parents sent me to the temperance class sponsored by the active and vibrant Wesleyan chapel. My mother in particular was passionately against alcohol and she kept only so-called medicinal alcohol in the house. She experienced the dangers at first hand. Her youngest brother of ten children was an attractive, much loved and rather spoiled boy who was an alcoholic. He was addicted. He tried to give up alcohol many times but repeatedly failed. As a young man he had a troubled marriage, nevertheless producing a wonderful daughter and son. He lost his health and one job after another and failed in businesses financed by his father, over and over. He was found dead in a gutter in his forties.

My parents wanted to ensure that their children did not follow suit; they feared a bad seed. So I dutifully attended the classes taught by an earnest woman with no sense of humor. She taught us conscientiously. We absorbed the alarming facts about possible disease and tragic experiences and the relative alcohol content of various types of drink and performed the experiments laid out in our textbook, Health, Wealth and Efficiency. We memorized its admonitions: The man takes a drink, the drink takes a drink, the drink takes the man.

I was well enough taught that when we took the national examinations I passed as a champion of temperance knowledge. There was a big award ceremony in the chapel and we all signed The Pledge to abstain from alcohol and were awarded certificates memorializing our success.

I confess that in later life I fell away from these good youthful intentions. My rationalization is to lay the fault on one of the experiments. The instructor was to take two glasses, fill one with a shot of evil whisky and the other with God-given water. A live maggot was to be placed in each glass. By the end of the class the maggot in the whisky would shrivel up and die. The maggot in the water would flourish in good health.

Unfortunately, our teacher could not bring herself to be seen purchasing whisky and was too squeamish to handle maggots. So she substituted household methylated spirits (known in America as wood spirits) for the whisky and earthworms for the maggots.

Somehow, the lessons in virtuous libation did not achieve lifelong adherence in me. But at least they ensured that I did not end up like Uncle Sam or in the stocks like poor Willy Bunt.