This is “Another memoir while memory lasts”, this one prompted by a recent conversation with some friends. I entitled it “Alert”.

Another anniversary of 9/11 has come and gone without incident. Well, no headline-worthy event within the American homeland and that is all that counts, right?

The perspective is different for people who have not always lived in America, a country blessed to have suffered only one significant attack on its mainland in the last two hundred or so years. Air raids killed ten times as many civilians in Britain during the Blitz in World War II as in America on 9/11 (some 32,000 compared with around 3,000. Both totals were a fraction of the massive casualties inflicted by the allies’ strategic bombing.) The city of Plymouth, home to the Royal Navy dockyard in Devonport, was targeted by 59 German air raids.

I was fortunate to grow up in Cornwall in the small and strategically unimportant town of Liskeard, some 20 miles from Plymouth. Once some incendiary bombs fell in a field a mile or two away, jettisoned by a German bomber lightening its load to flee home across the Channel after the raid. That was the closest we came to actual danger but the threat was always there. 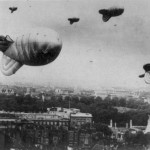 The Battle of Britain started in the summer of 1940. Above the horizon beyond the fields behind our house we could see barrage balloons, great hydrogen filled blimps tethered to steel cables, floating above Plymouth to obstruct attacking planes. We boys learned to identify aeroplanes, ours and the enemy’s. I spotted the Gloster Gladiator fighters patrolling the 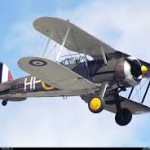 approaches to Devonport. It was not a reassuring sight. They were biplanes with a top speed of 250 mph, armed only with four point 303-inch machine guns. Their inexperienced young pilots were heroic but overmatched by the modern German Messerschmidt monoplanes armed with 20 mm cannons. Gladiators were all we had at the outbreak of the war until Hurricanes and Spitfires arrived.

I was a very small boy when the war broke out. My father was too old to rejoin the Duke of Cornwall’s Light Infantry with which he had fought in India, Mesopotamia, Palestine and Egypt in World War I. He volunteered for the ARP, the Air Raid Precautions organization responsible for civil defence, and was appointed Senior Warden responsible for the southern half of our town. My Uncle Dick joined the Home Guard and was issued a bolt-action Lee Enfield rifle with a magazine for five cartridges. He made a toy wooden rifle for me. It had a trigger guard with a hole big enough for my finger and I sanded it smooth so there were no splinters. I practiced marching with my rifle at the slope and could even present arms. I took it with me everywhere, just in case.

Everybody in the town did their bit, those too old, too young and too infirm for the armed forces. The ARP installed a device for detecting poison gas in our front garden; actually it was a one foot square piece of plywood mounted at a slope on a six-foot post. It was painted a yellowish green color which was reputed to turn pink if hit by chlorine.

And a stirrup pump and buckets for sand and water were delivered to our house for defence against incendiary bombs. I joined enthusiastically in the training for their use and was the only one agile enough to get up from the prone position 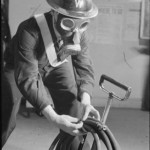 shown in the manual. It really wasn’t much more than a garden hose and the intent was to lie down below the smoke and crawl closer to aim the jet or spray of water into the heart of the fire. The old men in our team just did their best and stood up. How effective all this would have been in the event of attack was never explained but at least the civilian population could feel that something was being done.

People came around collecting tin cans and old saucepans and cutting off the beautiful decorative railings in front of the houses to be melted down for munitions. Miss Bryant at No 2 Manley Terrace complained that she had just had her railings painted, but the man in charge said, “That’s all right, mum, we’ll take them paint and all.”

At first the ARP wardens had drills, distributed gas masks to everybody and showed people how to put them on, and made sure that no cracks of light showed through the blackouts at night. They instructed the churches never to ring their bells except to warn that the invasion had started. One thing that disappointed the town’s fathers was that the smart new electric lights just installed to replace the gas lights in the main streets did not get used for another five years.

They called this period the phoney war, but things became real enough when the air raids over Plymouth started. My father decided at this point that he would have an air raid shelter installed in our back garden, partly to protect his family but also to set a good example. Uncle Dick’s building firm dug a deep hole and built a sturdy concrete structure to a government design. There were a wall and sandbags to protect the main entrance and the emergency hatch at the back against blast, and the roof was sloped to deflect bombs. There were layers of bunks to sleep us all and we kept supplies of food and water and blankets and bandages.

Dad’s working day at The Cornish Times was tiring because he had to help out with the work that the young men who had been called up used to do. But he was up night after night once the raids started. He would see us to the shelter but then have to put on his tin hat and his ARP arm-band and go off with his hooded flashlight to carry out his warden’s duties.

The siren sounding the “Alert” made an awful racket, howling with long rising and falling notes for minutes on end. There was no sleeping through it. Sometimes I was glad to be woken on the nights I had nightmares about German paratroopers breaking into my bedroom. My evacuee friend Leslie Solt subscribed to a magazine about war and weapons and the images he showed me of heavily armed and jack-booted Jerries frightened me more than I cared to admit.

It was worse on clear moonlit nights. The moon helped the defenders’ criss-crossing searchlights catch the bombers overhead, but the attackers could see their targets clearer. Once, going through the house in the dark huddled in my pyjamas and dressing-gown as I walked through the kitchen, I was frightened by a ghost. Blessedly, it was just my cat Tigger’s raw fish head lying on the counter, its scales glowing eerily in the dark with a phosphorescent moonlit glow.

We did not get much sleep in the air-raid shelter, disturbed by the persistent explosions of bombs and the ack-ack barrage. We were relieved eventually to hear the reassuringly monotonous note of the “All Clear” and creep our way back to our beds. I would lie awake in my own bed until at last I heard the steady rhythm of my father’s footsteps as he came back to the house and tried to get some sleep until he had to wake to go back to work the next day.