Yet another synchronicity happened in Port Isaac where we went to visit Doc Martin’s house. This popular TV series set in Cornwall is one of my favorites. 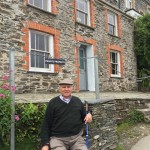 However, its popularity has attracted crowds of tourists, many of whom have bought the old cottages. So now the natives can’t afford to live in the quaint village and have had to move to new houses on the outskirts. 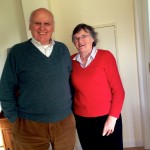 As we walked back to the beach my daughter Sarah’s friend Diana called out, “There’s Uncle Dugald, towing his boat up onto the beach!” Now Diana is the daughter of my friend Margaret Sproull Gorsky and Dugald is her brother. Their father was Dr. Sproull, the real doctor in Port Isaac. 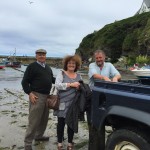 Dugald said, “Richard, my wife has just finished your book and loved it! Come up to the house for a cup of tea.” So we followed him up to the former doctor’s house. Inside on the couch in the living room was “The Miner & the Viscount” next to Helen’s knitting.

Dugald is a solicitor and negotiated a  royalty for Port Isaac from the Doc Martin production company, Buffalo Pictures. Who knows, perhaps their next TV series set in Cornwall will be “The Miner & the Viscount”!