March 5th is St. Piran’s Day and the Cornish celebrate it with enthusiasm! Piran is the patron saint of tinners and of Cornwall. The legend of St. Piran is a great favorite. I chose it for the Prologue of The Miner & the Viscount. The story speaks to Cornwall’s mystical origins rooted in the Celtic culture and language and to the importance of tin. Piran, or Pyran (Cornish: Peran) was an early 6th-century Cornish abbot and saint, supposedly of Irish origin. It was Piran’s demise and miraculous escape that gives him legendary status.

According to many contemporary accounts, Irish heathens, perhaps Druid priests, tied Piran to a mill-stone and rolled it over the edge of a cliff into the stormy Irish sea. However, I don’t believe the artist got the details  quite right, because actually Piran was spreadeagled on the millstone. It must have really hurt! 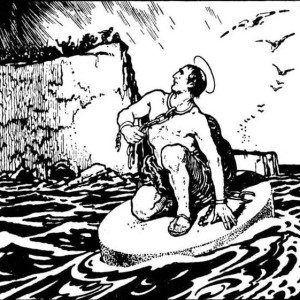 Anyroad, the storm immediately calmed and Piran floated safely over the water to land upon a sandy beach on the Cornish coast that became known as Perranporth. Happy St. Piran’s Day!