What is the point of studying history? The people are dead, the battles are over, the tools are different, the places have changed.

As I was pondering this question the mailman delivered a magazine from my old school. Flipping the pages, my eye caught an article about an old boy whose life had progressed from poor student to decorated admiral in the Royal Navy. The author asked why remembering such a career might have significance for us today. He suggested that we expand our own minds when we expand our horizons backwards, and that our capacity to remember is the most fertile element of our minds.

He pointed out that Thomas Jefferson wanted education to be primarily historical, so that “our people would thus be enabled to judge of the future.”

He argued, not that you could predict the future from the past, but that those who are ignorant of history would be incompetent to consider possibilities for the future in a wise and informed way. Indeed, President Jefferson’s view was that a sense of history is vital to the citizens of a free society if they are to remain free in the long run. The past is what gives us a deep perspective.

T.S. Eliot put it eloquently in Burnt Norton: “Time present and time past are both, perhaps, present in time future, and time future contained in time past.”

The author concluded with a wonderful quotation from a medieval chronicler who recorded the words of an old knight on the eve of battle. “It will not be a waste of time for you, young heroes, to listen to an old man who, through the chances of time, the changes of kings, and the variable issues of war, has learned to reflect on the past, to weigh up the present, and to surmise about the present from the past, the future from the present.”

To preserve our civilization, we must understand. 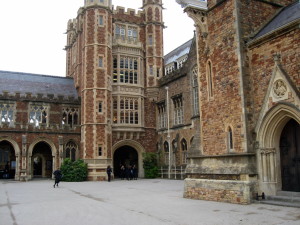 With thanks to Dr. John Cottrell for his

address in the chapel at Clifton College.

2 thoughts on “Thursday Thoughts: The Study of History”