Another memoir while memory lasts 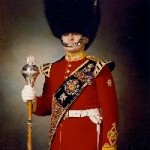 Not long after arriving in America we introduced Scottish dancing to our social circle (the Eightsome Reel, the Strathspey, the Dashing White Sergeant, the Sir Roger de Coverly) and also English Edwardian dancing (the Lancers, the Quadrilles, the Gavotte). We met regularly in each others homes to learn, practice and simply enjoy ourselves. It was all part of that special relationship that flourishes between Americans and their British cousins.

One of our Cincinnati hosts had a Scots house guest, who was visiting to promote a tour of a British Military Tattoo throughout North America. Brigadier Alistair Maclean, Queen’s Own Sutherland Highlanders, had produced the Tattoo at the Edinburgh Festival. He was bringing a magnificent show with the Royal Marines band, bands of the Scots Guards and the Scots Greys, Scottish dancers, a motor cycle display team, and the James Bond Aston Martin. It was booked to tour forty-three cities in the U.S. and Canada. But not Cincinnati.

I unwisely commented, “That’s unfortunate.” He said, “That’s easily overcome. All we need is someone here to promote it. You are volunteered.” The habit of command fell easily to Brigadier Maclean and my objections were firmly, if courteously, swept away.

A few days later I arranged for him to meet the president of the local chapter of the anglophile English-Speaking Union. After an amiable lunch at the Queen City Club, Maclean’s combination of firmness and charm led to an agreement that the chapter would sponsor the event. I unwittingly paid the price of being elected in absentia as the new president of the chapter with the major responsibility of organizing and promoting the event. But that is another story – as is the story of the coincidence of the Tattoo’s Pipe Major turning out to be Kilgour, who had been my brother-in-law’s batman in the Scots Guards and whom I had met when he piped at my sister’s wedding in Cambridge.

As we were chatting in the lobby after lunch, I saw John Dalzell. He had recently been appointed editor of the new “Cincinnati” magazine. Recognizing that friendly media coverage was going to be critical to success, I seized the opportunity to build a warm relationship between them and introduced them.

“John, this is Brigadier Maclean of the Queen’s Own Sutherland Highlanders. He is bringing the Military Tattoo from the Edinburgh Festival to Cincinnati. Brigadier Maclean, this is John Dalzell. He is proud of his Scottish ancestry, and he plays the bagpipes.”

“Harrumph,” said Maclean. He was not being charming. He was being cold. The after lunch conversation aborted at launch, and John said his goodbyes. Once out of earshot, Maclean said to me, “What did you say that chap’s name is?” “Dalzell,” I replied. “And he’s proud of his Scottish ancestry?” queried Maclean. “Yes,” I replied. “And he let’s them call him Dal-zell?” he demanded. “Yes,” I replied. “Americans aren’t really up on things like pronouncing it ‘Dee-yell’, and it’s hard to keep on explaining it.”

“And he plays the pipes and he’s proud of his Scottish ancestry and he let’s them call him Dalzell,” said a now apoplectic Maclean.

I enjoy that story and I must confess I have told it more than once. Oscar Wilde (or was it some other professional wit?) once said that England and America are two countries divided by a common language. I’ve often thought that the English joy in pronouncing names other than the way they are written (Marjoribanks, Featherstonehaugh, Urquhart, Menzies, Smythe, Montefiore) makes a characteristic contribution to the confusion. American amazement at the quaint customs of the Brits is part of what keeps the special relationship going.

Years later we were in Vermont having dinner with friends, including Mrs. Mackenzie, the elderly mother of our hostess. She too was proud of her Scottish ancestry. While I am always willing to work the conversation around to fit what I want to say, on this occasion there was a natural segue. Mrs. Mackenzie was a rewarding audience. She listened to my story with rapt attention. After I delivered the punch line she asked coyly, “Did you say Alistair Maclean? Did you say he was in the Queen’s Own Sutherland Highlanders? Are you sure?”

“I remember Alistair Maclean very well,” she said. “I spent a wonderful summer with Alistair in Scotland when I was a girl of eighteen.” Her eyes were sparkling, with a youthful enthusiasm. And very slightly, she blushed.

And that, I would venture to say, was a very special relationship.