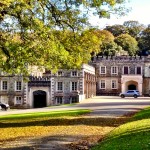 Edward Eliot, my protagonist in The Miner & the Viscount, inherited the great estate of Port Eliot, near St. Germans in Cornwall. This is one wing of the house, with the imposing main entrance wing to the right. The wing at the left at one point housed servants but now is where the estate offices are located.

Here the Earl of St. Germans, the present owner, is showing me around the house. 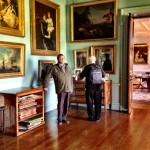 He is enormously knowledgeable about the accomplishments of his famous ancestors. There is a fabulous collection of paintings, including 14 by the great English portraitist Sir Joshua Reynolds.

Chapter 57 in The Miner & the Viscount tells the delightful story of a visit by Reynolds to his friends the Eliots, who were among his earliest patrons. Reynolds and Edward Eliot tell stories of their travels, Edward’s still youthful mother flirts with the artist charmingly, and Edward’s wife Catherine does her best to pry from Reynolds the secrets of his technique and his earnings. 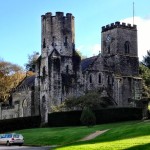 To the right of the house was the church of St. Germanus, once the cathedral of Cornwall. Port Eliot was originally a priory until Henry VIII dissolved the monasteries and sold it to a layman supporter. It was eventually bought by the Eliot family, who over the centuries improved it for family use. 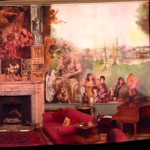 This is part of the spectacular 40 foot diameter Round Room at Port Eliot. It was designed by Sir John Soane the great 18th century architect and interior designer. The contemporary “Riddle Mural” was painted over several years by Robert Lenkiewicz from nearby Plymouth, but not finished when he died.