Every time I give a book talk people come up to me afterwards and describe how much they enjoy reading historical fiction. Of course, some readers simply enjoy a jolly romp in four-poster beds where the heroine is divested of her elegant eighteenth century gown.

Others say that they find an historical novel an enjoyable way of learning about history and the way people lived in the past. This view is very much in tune with the current search by educators for ways to teach history in a more engaging way, including notions of “big history” where students are challenged to think about the fundamental issues of human existence by learning about the distant past. After all, as the cliché tells us, those who do not study history are doomed to repeat it.

It gives me endless pleasure to talk to readers of The Miner & the Viscount and hear about their fascination with the amazing progress accomplished by their ancestors with tools that we consider primitive and systems that to us are cumbersome.

Just think of the ingenuity of Thomas Newcomen, the inventor of the steam engine, and the imagination of John Smeaton, the engineer who linked water wheels to steam engines to ensure plentiful power whether it was raining or the sun was shining. Then there is John Williams, the powerful mine captain who designed and built the Great County Adit, the ambitious drainage system that linked 60 mines across Cornwall. Imagine the strength and energy of the 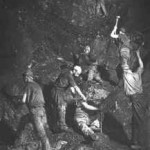 miners who dug deep shafts through hard rock and under the ocean with hand tools to extract the tin and copper they had the skill to find. And picture the sheer brilliance in mathematics it took to make the essential scientific calculations by hand with standards that varied from place to place.

Here is an example and the story behind the story. To make my story authentic I dug up fascinating information, including a contemporary textbook on arithmetic for mining captains and engineers.

The following passage shows Edward Eliot’s determination to understand the numbers. He is attending his first cost book meeting after becoming an “adventurer” (an investor) in the Wheal Hykka mine.

The cost book system was characteristic of the management of Cornish mines before the limited liability company. The adventurers would meet every quarter and the Purser would present the accounts and share out any profit or loss. The disadvantage was that typically no reserves were maintained.

Eliot is a man after my own heart. He wants to dig into the details and understand how things work so that he can make intelligent management decisions. He quickly learns how much he has to learn, and is impressed by how much his underlings understand. Eliot is different from his partner Viscount Dunbargan whose only interest is the money coming to him.

“How do you arrive at the correct weights and measures?” He dipped his quill into the ink and prepared to resume making notes.

John Williams gathered up the thread. “For one thing, the smelter won’t pay for wet tin stuff. So we accurately weigh out a sample of one pound of ore, then dry it over a fire and weigh it again. This gives us the neat weight, the percentage of reduction. Then we weigh the whole parcel wet in pounds and calculate the neat weight of the total by taking the percentage reduction.”

“What would be the weight of the whole parcel of tin stuff that you send off?” asked Eliot.

“It varies. We’ll give you a recent example. Look in your Assay Book, Penwarden, that’ll tell you,” said Williams.

“The last sample came from several kibbles, sir,” Addis said, reaching into his desk, pulling out the leather bound ledger and thumbing through the pages covered with his assistant clerk’s neat copperplate penmanship. He was not very quick at reading words yet but he could readily discern figures. “’Yes, ’ere ’tis. This last lot was one ton, five ’undredweight, three quarters, seven pounds and eleven ounces.”

John Williams warmed to his subject. “The rule of thumb is that every pennyweight of black tin produced from a sample of one gill of ore, wine measure, will give a hundred pounds avoirdupois in one hundred sacks. Of course, that would be eighteen-gallon sacks, beer measure. Did I say avoirdupois? That’s tin. Copper produce is weighed in troy.”

“I see,” said Eliot again, scratching his chin. “At least I think I do. Wine measure, beer measure?”

“Oh yes, sir,” said Williams. “There’s thirty-two gills in a gallon, but a wine gill holds twenty-two percent more than a beer gill. Course, if you were asking about noggins, I’d say there are sixteen in a pint.” Eliot put down his quill and stared at Williams.

Willy Bunt’s jaw dropped. He was about to ask a question when Polkinghorne caught his eye and put a finger to his lips. Bunt kept his counsel but wondered whether someone clever enough could devise a simpler system. Bunt realized he must be educated, learn reading, arithmetic; he needed education to earn more responsibility in his job, get better wages. But how would he ever understand all the different standards and customs for different materials, even different parishes?

To read more about the challenges overcome by the mine managers every day, go to LINK and see Chapter 49 “Management” and Chapter 50 “Inventor”.

If you would like a talk for your group about the book or life in 18th century Cornwall, email me at cornishchronicle@gmail.com.