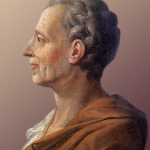 Is it possible that the French philosophers upon whom the Founders relied for guidance in creating the American Constitution got some things wrong?  Montesquieu in “The Spirit of the Laws” advocated the separation of powers, with the executive, the legislative and the juduciary maintaining a check on each other.

In my historical novel “The Minor & the Viscount” Edward Eliot disagrees. Historically he actually visited Montesquieu in France and talked with him. I create a scene in my story where Eliot concludes that the great philosopher was wrong in his interpretation of how the British constitution worked in practice.

In Chapter 57 Eliot describes how he and his friends went on the traditional Grand Tour of Europe, visiting European culture and influential people. His wife seems to have been a little improper.

“We went to Bordeaux and stayed at the Château de Brède with the Baron de Montesquieu the year before he died. Brilliant fellow. Thought himself an expert on our British constitution after spending a mere eighteen months living among us. Talked some sort of claptrap about the separation of powers. Couldn’t have noticed that half the members of the government are related to each other and the other half spend much of their time in and out of each other’s wives’ bedrooms!”