AN ANCIENT book has been discovered at Lanhydrock that helped Henry VIII to build his case against the Pope and annul his marriage to Catherine of Aragon, first of his six wives.

We can connect threads here. As readers of The Miner & the Viscount know, Lanhydrock is the great house that is the home of my fictitious villains, the Trenances. Like 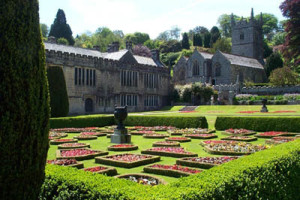 many Cornish estates, there is a church right by the house. Why? Because it was originally a priory. When Henry VIII brought about the Dissolution of the Monasteries (the greatest real estate scam in history) many priories plundered from the church were sold to wealthy laymen.

The book (dated 1495) is a summary of works by philosopher and theologian William of Ockham who was a major figure in medieval intellectual and political thought. Its contents help explain the persuasiveness of the arguments Henry VIII’s advisers made against the Pope.

The book has been at Lanhydrock for many years, but what has just been discovered is its direct connection to the royal library at Westminster Palace. There is an inventory number inside which corresponds to the inventory prepared in 1542 for Henry VIII’s chief library.

To help  gather evidence to support an annulment to Henry VIII’s his marriage, his agents scoured the country for texts such as Ockham’s which questioned the authority of the Pope and argued for the independence of the monarch. The volume at Lanhydrock contains marginal notes and marks which were made by Henry VIII’s secretarial staff to draw his attention to relevant passages.

So was the Reformation at its root motivated to sweep corruption from the Roman Catholic Church? Or was it Henry’s cover story for schemes truly driven by sex and money? We know he wanted to get rid of his Spanish queen so that he could marry the lusty Anne Boleyn. He also created the opportunity to seize the property of the Church of Rome.

Richard Hoskin with Paul Holden at Lanhydrock in the Long Gallery

Lanhydrock is now in the National Trust. Paul Holden, house and collections manager, said: “To have such an interesting book in the collection is fascinating in itself but to find out that it was once owned by Henry VIII, and played a part in a pivotal moment in British history, is very exciting.

“It’s thrilling to discover that the book at Lanhydrock is from the Royal library. The book is important not only for its provenance but for the notes entered in it by Henry VIII’s advisers and no doubt intended for him to see. They draw attention to precisely the sort of issues that were so relevant to the King’s policies in the years leading up to the break with Rome.”

On a personal note, I owe much to Paul for the expert information he provided me about Lanhydrock and the Robartes family. He added much to the richness of my book.

One thought on “Thursday Thoughts: Mystery unveiled at Lanhydrock”