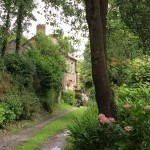 Our July promotional tour of Cornwall was amazing . . .  in many ways.
Every day there was a new connection, coincidence, synchronicity.

One involved Steve Hoskin, who lives in Boulder with his wife Freda. My daughter Sarah lives in Boulder too, and gave a Nordic pole walking class which Freda attended. They all met up and Steve told of his interest in Cornish genealogy. Were the two Hoskin families related? And then he read The Miner & the Viscount.

First thing Steve discovered was about the name of the Port Eliot steward, Charles Polkinghorne. I had chosen it for one of my characters, I thought, because it was typically Cornish . . . although it did ring a faint bell. And I did see the name on a grave stone in Mineral Point, Wisconsin, when I spoke to the Cornish Society there.

However, when Steve came to my book talk in Boulder in June he reminded me that when he researched my Hoskin ancestry he found that my great aunt Susan Hoskin had married a Polkinghorne!

There’s more to the story. I’ll tell it next time. It’s about Steve’s ancestors, how they came to the Rocky Mountains and their connection with the village of Perrancombe in Cornwall. Synchronicity!