From “The Miner & the Viscount” Chapter 1

“He prayed, without a book for sustenance and forgiveness. Ro dhyn ni hedhyw agan bara pub-dydhyek; ha gav dhyn agan kendonow kepar dell evyn ni ynwedh dh’agan kendonoryon. They resented the English church that was whittling away at their own language. A hundred years ago their forebears had rebelled against the new prayer book of the established church that made them say it differently: Give us this day our daily bread. And forgive us our trespasses, as we forgive those who trespass against us.”

Readers have asked about the strange looking dialog that they see in my book from time to time, such as this prayer from Preacher Perry at Gwennap Pit. The language is Kernewek, the ancient Celtic tongue that once was the community language in Cornwall. The last “monolingual” speaker was Dolly Pentreath, a fish seller in Mousehole, who died in 1777.

Cornish has enjoyed a revival sparked largely by the Cornish Gorsedh, and especially since Europe last spring recognized the Cornish as a distinct ethnic group. In 1967 the Gorsedh joined with the Federation Old Cornwall Societies to create the Cornish Language Board, Kowethas an Yeth Kernewek, charged with encouraging teaching and publishing in the language. They stressed developing a standard system of spelling and pronunciation, Kernewek Kemmen. 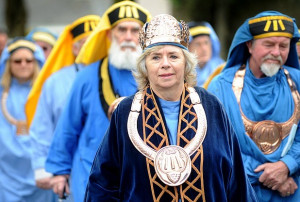 Maureen Fuller, Grand Bard of Cornwall and a board member of Kowethas an Yeth Kernewek, was kind enough to provide the translations for my book. They added greatly to the colorfulness and authenticity of the dialog.